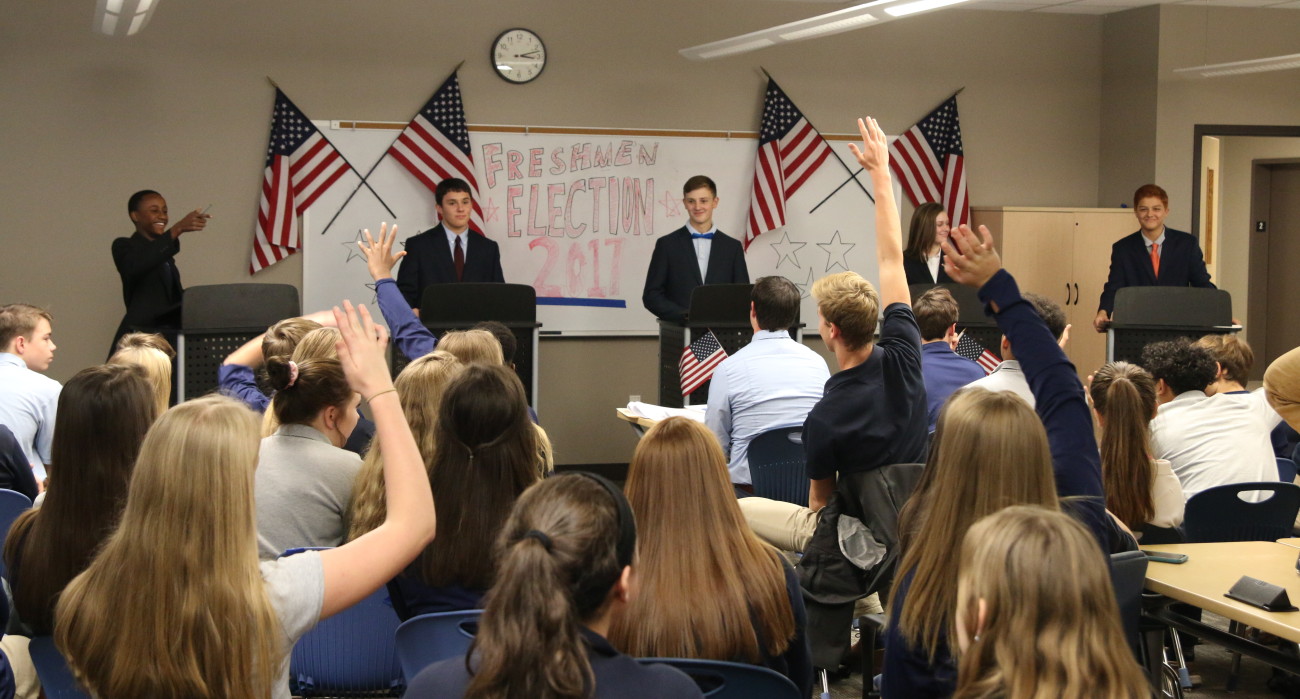 Tolton Catholic students headed to the ballot box this November to cast their votes for the 2017 Freshman Election. Due to the tightness of the race, a recount was conducted, overseen by the esteemed Fr. Mike Coleman. The recount confirmed the Dylan Seidt-Hanna Hulshof campaign beat out the Teague Travis-Jayden Berrey campaign by a single vote. Dylan Seidt is the third Freshman President in the school’s history.

While the Freshman President and Vice President will not have any actual powers or responsibilities, students did learn the ins and outs of what it takes to run a political campaign. The two-and-a-half-week project was part of Mr. Pat Kelly’s Freshman Government class. Students were broken out into groups of five, with roles including candidates for President or Vice President, campaign staff and general staff.

At the beginning of the campaign season, candidates sent polls out through the school in order to find out what issues the teachers and students cared most about. They then used that information to write a platform for the presidential candidate to campaign on. The staff would then help create a campaign slogan, positive and negative posters to be hung throughout the school, a website, and positive and negative campaign commercials.

As in the real world of politics, the advertising and promotional materials came at a cost. Groups were able to obtain “Kelly Dollars” to finance their campaigns by presenting their campaigns to Tolton teachers and administrators. Each club and sport at Tolton had a designated person who could hand out “endorsements” of a campaign, often based on promises from the candidates. The more money a campaign earned, the more posters they were able to hang up, and the more opportunities they were given to send out school emails, make PA announcements, and hand out buttons and flyers.

Of course, over the course of the campaign scandals break on the @ToltonWikiLeaks Twitter account.  Once a scandal broke, campaigns had 24 hours to issue an official press release.  Scandals this year included: not saying “God bless you” to Fr. Mike after he sneezed, being seen out of school dress code, being caught giving out cupcakes without frosting, as well as others.

One of the highlights of the project is the debate.  All candidates participate in the debate in which the entire school is invited to attend.  Debates this year had roughly 75 people in attendance. Candidates were grilled by a panel with questions about their platform as well as their scandals.

The official election was held on Thursday, November 9 with a record turnout of 200 votes cast by students and teachers. Votes were counted Thursday evening, with updates posted on Twitter as the results came in. The Seidt-Hulshof campaign received 26 votes compared to 25 votes for the Travis-Berrey campaign.

On Friday during class, the losing candidates delivered their concession speeches, and President-elect Dylan Seidt gave his victory speech.