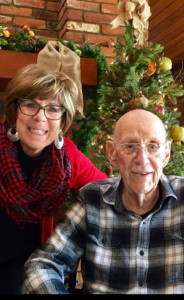 Faith-filled.  Visionary.  One of the “original trailblazers.”  There are many ways to describe Gene Drane.  Always one to lend his talents and treasure to the Catholic community, Gene was highly involved in the early planning that resulted in the Tolton Catholic High School we know today.

When Gene passed away in September, his daughter Colette approached the school – she wanted to “share her blessings” to support the school in a way that would “really make a difference”, and serve as a tribute to her dad’s legacy.  After some discussion with the advancement staff, Colette chose to establish the Drane Family Endowment.

This gift is especially significant because the earnings from the investment are set up to provide unrestricted support to fund the school’s day to day operations.  Operations endowments represent the life-blood of most Catholic schools. Tuition doesn’t fully cover the cost of educating a student, and earnings from funds like these help schools cover the budget gap.  Tolton is blessed to have a number of scholarship endowments that provide tuition assistance for deserving students but, until the establishment of the Drane Family fund, Tolton had no such endowment to be used to support the school’s general activities.

It is Colette’s hope that her gift represents the “seed money” for what will grow into the school’s primary operations endowment.   She felt this fiscally-prudent effort would be especially meaningful to her dad – his vision for the school became a reality; he also knew it would take resources to see that reality sustained.

In future years, Colette intends to add to the fund as she is able, and hopes others will choose to support the effort as well.  If you would like to contribute to this new operations endowment, please contact the Tolton Catholic Advancement Office at 573.445.7700 (ex. 2109).