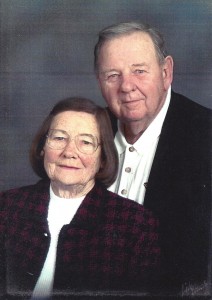 A few months ago, the Tolton advancement staff enlisted the help of former Mizzou Tiger, Gary Link, now a faculty member at Tolton Catholic, to make some calls on the school’s behalf to contacts outside the Columbia area that might be interested in supporting Catholic schools. Link encouraged his friends to support our Blaze of Glory Gala and invited them to attend the November event. One couple had a more specific intention for choosing to get engaged with Tolton – and their engagement will have long-term positive impacts on the school’s student community.

Gerard and Jane Grewe’s hopes were simple – they wanted to honor John and Dolly Kadlec with a scholarship endowment in the Kadlec’s name.  Cousins (Jane’s mother was John’s aunt), the Grewe and Kadlec families lived blocks from one another in South St. Louis. John and Dolly were most gracious hosts to the Grewe’s young family over the years and Gerard and Jane have many fond memories of the Kadlec’s kind and welcoming ways.  The Grewe’s knew how much Catholic education meant to John and Dolly, and were aware of the role John, especially, had played in early fundraising efforts to establish Fr. Tolton Catholic High School.   For these reasons, they chose to honor John and “the Doll”.

Better known as “Mr. Mizzou,” John Kadlec served as the color analyst on the Tiger Radio Network for 16 years. John played football for the Tigers under Don Faurot in the 1940s and worked two stints as an assistant football coach. He later directed the Tiger Scholarship Fund at Mizzou. In 1996, John was inducted into the MU Athletics Hall of Fame. John passed away in 2014 at the age of 86. Dolly passed away in 2011 at the age of 82, not long after the couple’s 60th wedding anniversary.

John and Dolly’s granddaughter, Katherine, benefitted directly from her grandparents’ philanthropic and volunteer efforts to found Tolton, graduating from TCHS in 2017, before continuing “Mr. Mizzou’s” family legacy at MU on the softball team.

The John and Dolly Scholarship Endowment is sufficient to fund four annual scholarship awards at Tolton Catholic, in perpetuity.  Two annual awards will be need-based and available to any student with demonstrated financial need (including returning students and rising 8th graders who will be freshman at Tolton). The other two awards will be merit-based, and will be awarded to returning Tolton students only, based on grade point average, disciplinary record, and service hours.

John and Dolly’s son, Johnny, was delighted and humbled to learn of this gift. He will be personally involved in the evaluation of applicants who meet the criteria for the awards.  The first scholarships will be awarded in the spring of 2019, to be applied to student accounts for the 2019-2020 academic year.  The Grewe’s encourage other friends and fans of the Kadlecs to consider a contribution to help grow the fund and pay tribute to John and Dolly.  They look forward to touring Tolton Catholic, and meeting their initial scholarship recipients, next year!