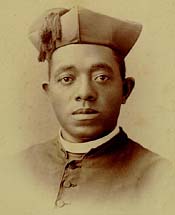 “The world offers you comfort, but you were not made for comfort, you were made for greatness.” – Pope Benedict XVI

Conversations about race can be uncomfortable, especially when those conversations are being had mostly online as people around the world distance themselves to fight a global pandemic. It is uncomfortable to step off the well-worn path. But for far too long, the conversation has been put off and then put off again. We at Fr. Tolton Catholic High School are as guilty of that as anybody. Even this statement is overdue.

Archbishop Jose H. Gomez, president of the US Conference of Catholic Bishops, spoke the truth well when he wrote on May 31, “We should all understand that the protests we are seeing in our cities reflect the justified frustration and anger of millions of our brothers and sisters who even today experience humiliation, indignity, and unequal opportunity only because of their race or the color of their skin. It should not be this way in America. Racism has been tolerated for far too long in our way of life.”

In the wake of the killing of George Floyd, the country has turned its attention once again to the issue of racism – an issue we should all agree on – and yet it seems to divide us. And while the voices may be louder recently, the issue is not new. As a school founded in the name of Augustus Tolton, the first African American priest in the United States, we cannot sit on the sidelines as our country debates the way forward. We are called to action.

In 1854, Augustus Tolton, was born into slavery in Brush Creek, Missouri, about a two-hour drive northeast of Columbia. While his family was able to flee to Quincy, Illinois in 1862, Tolton continued to face barriers because of the color of his skin. With no Catholic seminary in the United States accepting African American students, Tolton studied and was ordained in Rome. Upon his return to Quincy to serve as pastor of St. Joseph Catholic Church, Fr. Tolton continued to face racial hostility and ultimately was reassigned to Chicago where he helped build St. Monica’s Catholic Church.

Our country has come a long way since 1854, but racism is deep in our culture. While we pride ourselves on being the Trailblazers, it is important to follow the lead of those who blazed the trail for us. We look to the example of Fr. Tolton, a man who persevered against all odds to show us how to live a life of inclusiveness. More than a century since his passing, his words continue to guide us. It is important now that we listen, practice empathy, and then create a plan for action until the equality that we all seek is realized. We can not undo 400 years of the sin of racism overnight, but we can take steps on the path of righteousness.

As Americans we have a precious freedom to protest against injustice – and we are hearing the justified frustration of millions who have waited far too long for justice and equality. However, the violence and looting in cities around the country runs counterproductive to those demanding real change. As Christians we are called to be peacemakers and advocates for change through non-violent means. We pray those means become clearer in the days and weeks ahead.

The Bible teaches us that “faith of itself, if it does not have works, is dead” (James 2:17). We join others around our country and community in praying for an end to racism, but we also know that prayer itself will not solve these deep-rooted issues. We have an obligation to be proactive. As Angela Davis said, “It’s not enough to be non-racist, we must be anti-racist.” We recognize that it’s not enough to issue a statement. It’s not enough to use hashtags. We must look ourselves in the mirror and ask how each of us can be better – as individuals, as a school, and as a community of faith. We expect to be judged not by our words, but by our actions in the months ahead. It’s time to get to work.