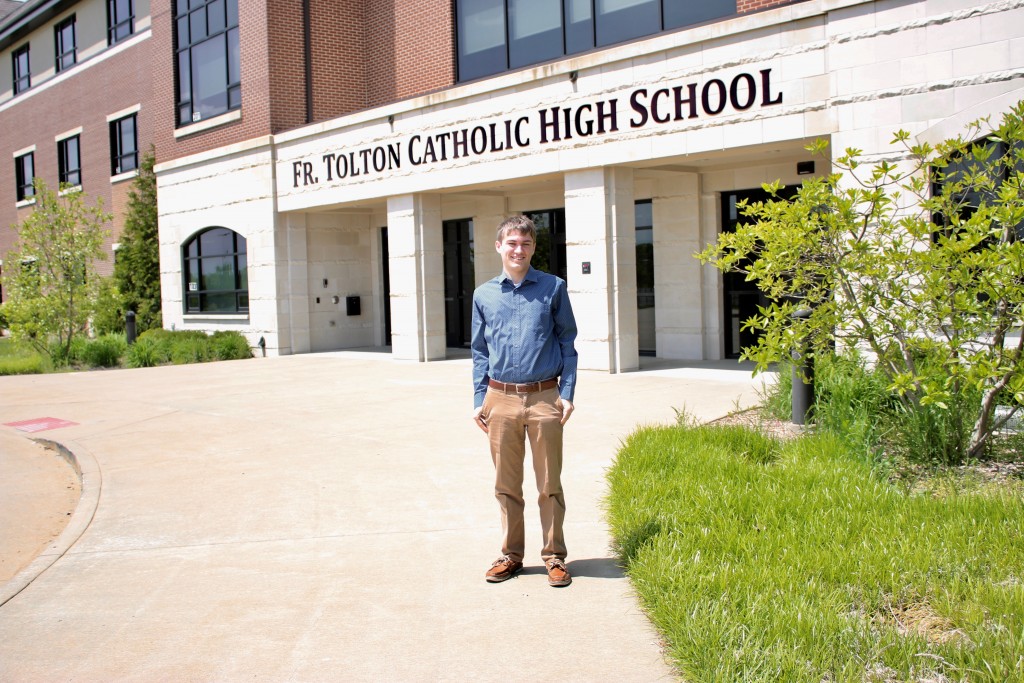 After graduating from Tolton Catholic in 2015, Coleman Sapp probably never anticipated spending so much time back in the building five years later. But after finishing his undergraduate degree in Neuroscience and Behavior from the University of Notre Dame, Coleman moved back home to take a gap year while he applied to graduate school.

Back in Columbia, Coleman wanted to save money for graduate school, while also looking for ways to boost his resume. It was his mom that suggested he reach out to Tolton about substitute teaching.

“I was hesitant at first about jumping in front of a high school classroom, but my long term goal is to teach college students and I loved my experiences at Notre Dame designing curriculum and tutoring so I ended up sending an email to Gwenn Roche and meeting with her later that week,” Coleman said.

Coleman assumed he would probably receive a call once a week, but he said after his first day subbing for Mrs. Tramel, he started receiving calls almost daily. That’s likely because the students enjoyed having him in class and learned a lot from him.

“From my experience of having Mr. Sapp as a substitute teacher, I quickly realized that regardless of the subject, I always ended up learning a lot of information,” said Junior Kate Sasser. He teaches in a relatable, easy to understand way where I can always feel confident to ask as many questions as I need.”

Coleman initially planned to teach mostly math and science classes, but he ended up spending several weeks as a long-term English sub.  He said that was daunting at first, but he ended up enjoying the process of lesson planning, executing the lesson, and seeing results in the students’ essays. “OK, grading 70+ essays wasn’t the most fun I’d ever had in a weekend,” Coleman quips. “But when it was all said and done, it was great to see results!”

In addition to teaching, Coleman also started tutoring students, after school for ACT preparation at first, and then during study halls when students would come to him for extra help with math and science.

“I’m especially grateful for this opportunity now because, while substitute teachers were not exactly needed for online school, I’ve still made myself available to students who need math help while they’re learning online,” Coleman said.

Kate Sasser said that not only did Mr. Sapp help her with questions about AP Chemistry and Pre-calculous, but he also helped her immensely with both the math and science portions of the ACT.

“With the weekly ACT tutoring and helpful tips, my scores have shown a lot of improvement already,” Kate said.

Coleman looks back on his days at Tolton fondly, particularly his involvement with the Mock Trial team and Scholar Bowl team.

“Spending so much time at Tolton after graduating five years ago was strange at first but it was great to see so many familiar faces.” Coleman said.

“While subbing one day, I was also able to watch a Scholar Bowl match after school,” Coleman said. “I had been on the first Scholar Bowl team at Tolton and it was fun to see the match as an audience member rather than a participant.”

Coleman’s work at Tolton has certainly made him deserving of the Blazer Alumni Achievement Award, but he has accomplished far more than substitute teaching. At Notre Dame, Coleman was involved in student government, and helped his advisor create a neuroscience “Brain Health” curriculum for Kindergarten-12th graders. He was member of the Senior Leadership Committee for the neuroscience major, helping design curriculum for the relatively new major. He also spent a semester abroad in London. He continues his involvement with Notre Dame, reading applications for their precollege program, and helping them develop an online program for this summer.

Coleman has also spent time volunteering a few times a week with Ukatsu in Columbia, a youth development organization that specializes in kids who are interested in gaming. He helped run their biweekly fitness program.

With his gap year nearly finished, Coleman plans to attend graduate school at Kent State University in the fall to study the intersection of neuroendocrinology and social behavior under Dr. Heather Caldwell.

We wish you all the best, Coleman! Congratulations on your award, and thank you for giving of your time and talents to the Tolton community!