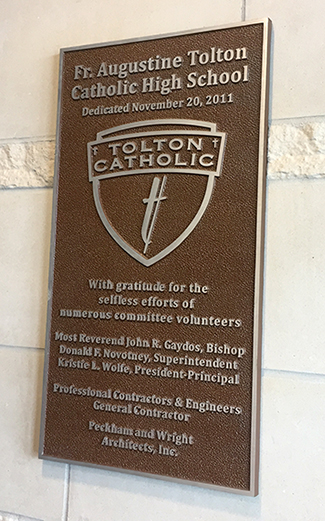 Talk of opening a Catholic high school in Columbia had become a serious conversation by the time Bishop John R. Gaydos arrived in the Jefferson City diocese in 1997. In a 2001 statement of his vision for the local Church, he called for “a study of how to expand the possibilities for Catholic secondary education in the diocese.” Feasibility studies indicated strong support among Catholic parishioners in Columbia and surrounding communities for opening a Catholic high school.

Parishioners wanted the school built on a foundation of Catholic spirituality, college-prep academics, and leadership-development opportunities for students. They helped their parishes pay down construction debts, which allowed fund-raising for the new school to begin in earnest. The diocese provided $1.5 million in seed money through the “Grateful Memories … Faithful Future” capital campaign in 2006 and the bishop authorized the purchase of 23 acres of prime real estate between Gans Road and Bristol Lake off U.S. 63 in southern Columbia.

Fund-raising progressed, a curriculum was developed, plans were completed, and zoning and permits were obtained.

“This is a work of God!” Bishop Gaydos stated. “One of the main missions of the Church is to teach, to sanctify and to guide. One of the principal reasons we exist is because God has called us to share in that work of Jesus, to teach and to hand on the good news of salvation.”

The community was invited to suggest names and a rationale for naming the new school. A committee narrowed the suggestions down to three and presented them to Bishop Gaydos. He decided to name the school in honor of Father Augustus Tolton (1854-97), a Missourian who was born into slavery in 1854 and eventually become the first African-American priest of the Roman Catholic Church in the United States. Dr. Julie Stansfield had suggested the name through the committee. Juanita Yates of Monroe City also suggested it in a letter to the The Catholic Missourian.

A fund drive to raise an additional $5 million in pledges in 2009 allowed the executive committee to secure financing for the rest of the school’s cost. Bishop Gaydos authorized initial site work and excavation for the school to begin in April of that year. He appointed parishioner Dr. Kate Trauth to serve as the chairwoman of the executive committee and of the search committee to find a founding principal. Upon the committee’s recommendation, he hired Kristie Wolfe to serve as the school’s first president and principal, beginning July 1, 2010. Her mission would be to attract families to the school by setting and helping achieve high standards and keeping the school deeply rooted in Catholic values.

“Trailblazers” was chosen as the school’s mascot, honoring Fr. Tolton and all the other historical figures who took risks and endured hardships so people after them could have a better life.